In 2012, Hasbro began to release a tie in toy line to the film GI Joe: Retaliation, itself based on characters and concepts on the nearly fifty year old brand that Hasbro introduced to the world in 1964. GI Joe began life as a twelve inch tall military inspired figure and invented the concept of an "Action Figure". The brand has experienced numerous ups and downs during its existence, finding itself at the centre of popular culture during the early to mid-nineteen eighties and relegated to the wilderness during most of the nineties and mightiest except for brief periods. One thing had remained true however: GI Joe figures have always remained at the forefront of toy design when it comes to playability, posability and design. The toy line for Retaliation is no different. Despite a weaker economy, higher costs and a movement away from traditional toys the retaliation line of action figures and vehicles still manages to outclass its competitors on the shelves of your local toy store.


Our planned guide book aims to celebrate this fact with high quality photography of every figure, vehicle and accessory released in the course of this exciting line. Our aim is to provide Joe fans with both a useful reference guide and a handsome "coffee table" style book that showcases this line at its best. Planned contents include:


·         Diorama photography of the figures showcasing their unique design features and posability.


·         "File cards" for every release that give background on the characters.


Our aim is to produce an 88 page (approx.) paperback that covers every aspect of the four inch figures released in 2012 and 2013 as part of the line. We want this to be something that fans will be proud to own and will refer to again and again. We've pulled together some sample pages to show you the standard of quality we want to bring to the finished product. In order to provide limited print run of paperbacks we require €5,500. (Around $6,800 depending on currency exchange rates.) In order to reach this goal we've prepared incentive packages that we feel will return excellent value to our backers.


Who are you people? I've no idea who you are.


Hi, we're Brian Hickey and Paddy Lennon. We're massive Joe fans. Brian is a professional graphic designer with almost 20 years in the business. As well as books and magazines, he’s designed album covers, advertising campaigns and websites. Paddy is an aspiring writer with one novel and dozens of short stories to his credit.


Because they're really good, if underappreciated, toys that deserve some time in the spotlight.


There are a handful of other reference and guide books that cover other GI Joe toy lines. We feel that the Retaliation toys are just as deserving of a reference guide.

Why are you doing this now?


Mainly as the line is coming to an end in the coming months with the final vehicles and figures currently making their way to store shelves and we want to strike while the iron is hot.

What are you going to use the funds raised for?


Most of it will be spent on printing a run of paperbacks for backers. The remaining funds will be used to prepare the additional rewards (prints and posters) for the higher reward levels and get materials to build diorama stages for the figures. We won’t be spending any of it on toys, we own all those already!


What if you don’t hit your target?


That’s a risk, It’ll mean we won’t be able to do a print run or any of the additional prints or posters. We will make the book available as an ebook via the usual marketplaces. This is happening no matter what!


What are your rewards?


We want to give everyone who contributes an amount of bang for their buck. We’ve priced out different reward options and we thing the following options will give backers their money’s worth.  Dollar values are approximate and will change based on exchange rates.


A copy of the book in PDF format plus an electronic version of a new File Card for each Retaliation figure.


Credit in the Acknowledgements page of the book, One signed copy of book, plus Level 1 rewards above


A print of Poster print of one of the Dio Images from the Book (Size: 18 x 24) and  Action Figure art print of a G.I. Joe Retaliation figure of your choice (Size: 18 x 24), credit in the Acknowledgements page of the book, One signed copy of book, plus Level 1 rewards above


One copy of the paperback, e-book,  the prints and posters from level 4 and your name included on one of the diorama photos (a street sign or similar) plus a print of the relevant diorama shot and a credit in the acknowledgements.


A complete set of original, new file cards, beautifully designed and printed on 400 gsm board, gloss laminated and trimmed to size, plus everything from Level 5 above.


US backers will have to add €17 or $22 for shipping for levels 2 to five.
Please see sample pages below to give you an idea of what to expect and feel free to contact us on totalretaliationbook@gmail.com if you have any further queries. The project will be officially launched at Roll Out Roll Call 4 in Southhampton on the 13th of October 2013 at 10.30am at a panel presentation where we will share some more information about the book and show off physical copies of some of the rewards!
We're also hoping to line up interviews on various Joe and geek oriented podcasts to get the word out and make this a success so be sure to check back for updates. 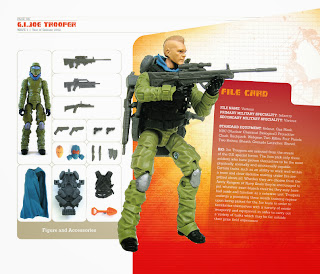 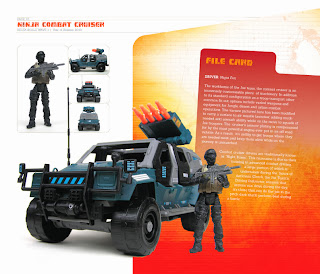 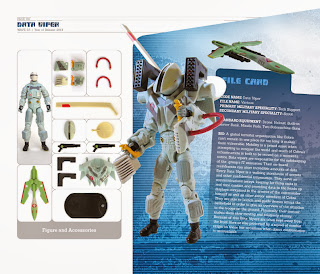 Sample page featuring the Data Viper
Posted by Total Retaliation at 09:50 No comments: