The Total Retaliation Launch panel started with an almost full room at the Roll Out Roll Call (RORC) convention last Sunday 13th October.  Brian Hickey, professional designer, and Paddy Lennon, self-published writer, started their presentation with the reasoning behind the project: “We are doing this, because we love GI Joe”. As fans, their soft spot is the Retaliation Toy line. The line as described by the Total Retaliation team is filled with imaginative design and has a great sculpting calibre (the attendees who stayed for the latter panel had the pleasure to meet some of the people responsible for these really impressively detailed figures). The Total Retaliation project is looking for support through Fund It, the Irish version of the better known Kickstarter (http://www.fundit.ie/project/the-total-retaliation-project). 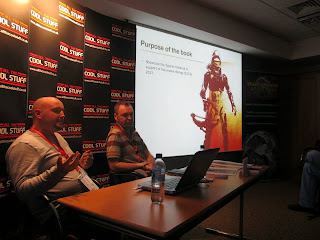 Brian and Paddy discuss the purpose of the book.


The presentation kicked off with a brief introduction of Hickey and Lennon, who are planning to include in the guide any toys released before the end of 2013. Having the guide ready in 2014 would allow them to celebrate the 50th anniversary of the brand with a print run of the book and other special incentives.


The Total Retaliation team seem to complement each other quite well. Brian Hickey is an experienced designer. He prepared some prints for RORC, which delighted all those present at the panel. These made obvious he could provide backers of the project with a satisfactory product from the aesthetic point of view. 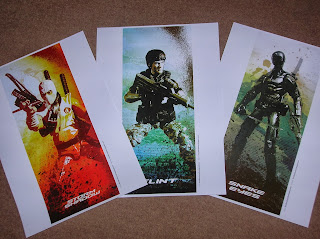 Prints especially prepared for Roll Out Roll Call
Paddy Lennon's ace up his sleeve is his knowledge of the fiction which has grown with the brand since its launch in 1992. Lennon has read GI Joe comics regularly and for so many years that he knows all about the characters and has amassed enough trivia to create his own material for this book (to avoid the much feared copyright infringement!). He will be responsible to create the unique content for the file cards which will be available to all contributors. As a special incentive some backers will have access to the cards: printed and trimmed to their appropriate size.


This is a book by fans of the toy line for the enjoyment of other fans. It has everything you wanted to know about the figures and vehicles of the line, as well as a very attractive design to present it. As explained by Hickey, the book will contain different pictures/views from each character and vehicle (plus accessories). He will put together dioramas especially for this book too. As he mentioned at the panel these toys are so incredible you always would like to take them down from the shelf and play, it’s clear that he can bring such enthusiasm to the aforementioned dioramas. 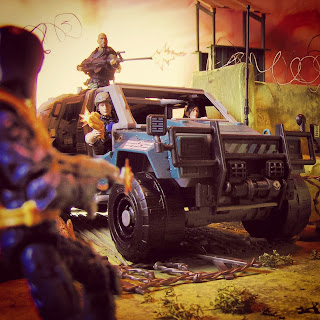 A sample of one of Brian's dioramas
The Fund It campaign started last week and ends on 29th November. The launch panel of Total Retaliation showed this partnership can impress and entertain. We also learned how committed they are to hit their target. Yo Joe!


Posted by Total Retaliation at 12:47 No comments: