The fourth and final wave for the G.I. Joe Retaliation toyline. Here are some of the unprocessed images from the "action pose" photo shoot. 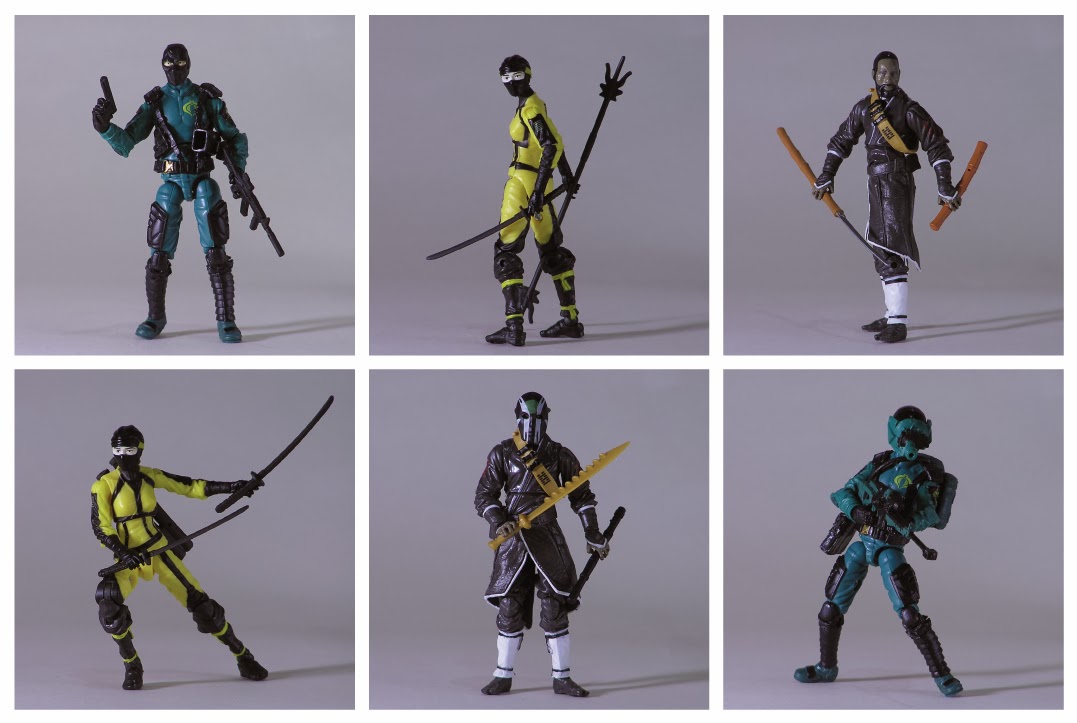 Posted by Total Retaliation at 13:32 No comments:

Wave 3, The Ultimate Wave, certainly lives up to its name. Some of the best figures released in the Retaliation line are featured here. Here are some of the raw, unprocessed images from the "action pose" shoot. 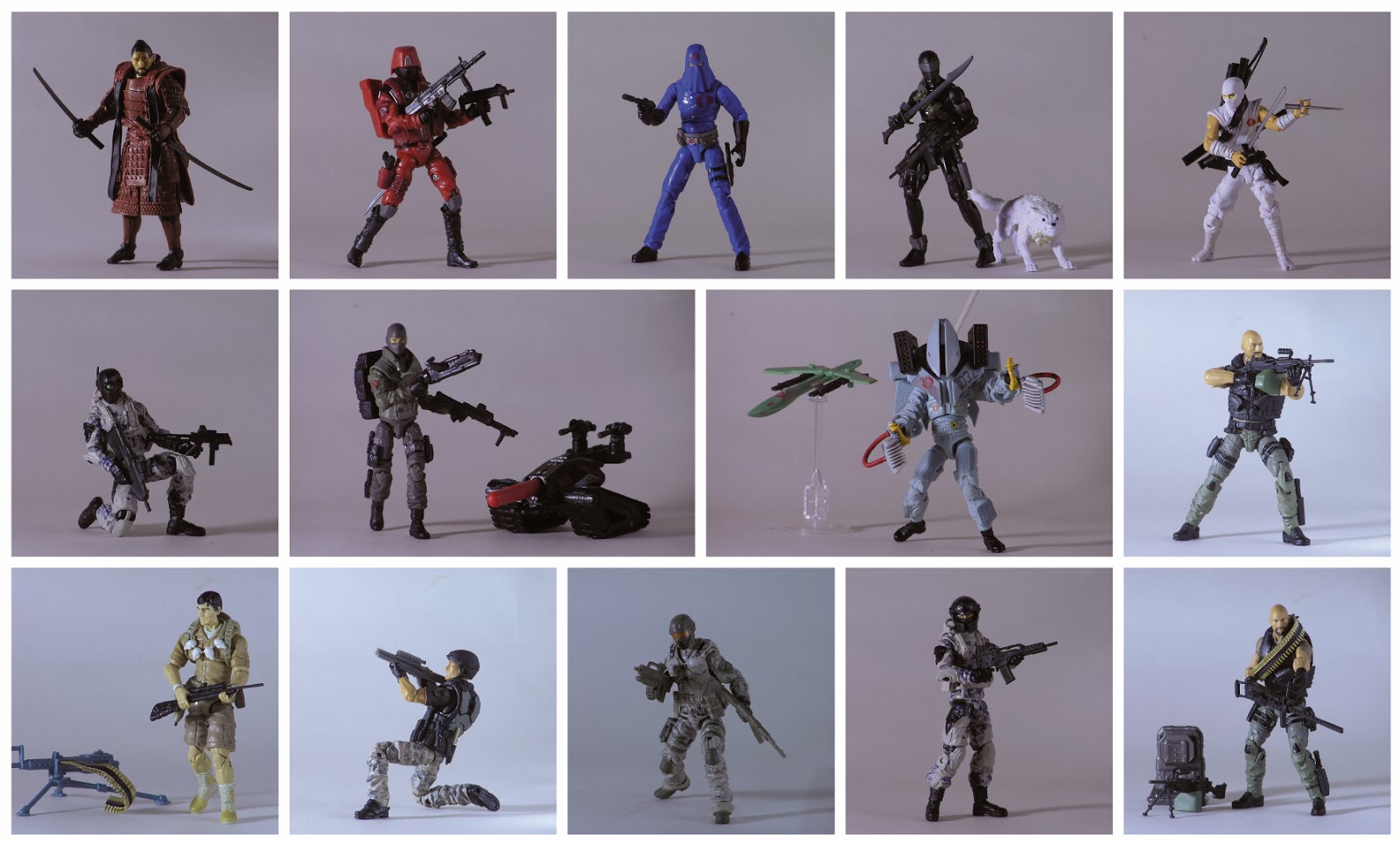 Posted by Total Retaliation at 13:29 No comments:

Brian’s been busy the past few weeks taking some amazing photos for the book (as you can see from some of the other posts recently). I thought now would be a good time to talk a little about where I’m coming from with the filecards.
The retaliation toyline can be broken down into two broad catagories:
Generally speaking, If they’re in the movie I’ve kept the file cards in line with what their characters were like in the film. Roadblock is Roadblock after all. In some cases I haven’t had a lot to work with *cough* Blind Master *cough* but in other cases there’s supplementary material for me to draw on, like the IDW prequel comic that was a year too early. In those cases where there’s very little to go on I’ve taken what there is and ran with it, embellishing what’s already there and in a couple of cases just going crazy and making things up!
I’ve tried my best to avoid retelling the plot of the film as that would be pretty boring for most Joe fans as you’ve seen it already. In those few cases where someone from the first film is carried over to the Retaliation line I’ve tied to fill in some gaps between the films which were pretty much ignored by the movie. Wave One Duke’s file card is an example of this (see below!). 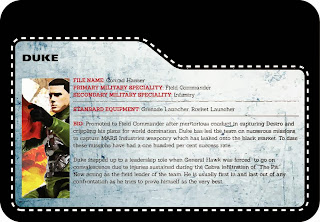 For the non movie figures I’ve tried to stay true to their previous file cards if they had them, researched using sites such as YoJoe.com. Most of these characters were done right first time so it’d be arrogant of me to change what’s already been done well. In some cases I’ve updated the file cards to take account of the fact that it’s thirty years since the originals were written. Occasionally I’ve thrown in a random reference to something either in pop culture or in the larger history of the Joe brand to keep readers on their toes, try spot all of them when you get to read the book!
Some characters defy updating. Budo’s file card in particular gave me some pause. In my opinion, the Budo in the retaliation line can't be the same person as the one released back in 1989 . There’s just no logical reason why an Asian-American kid from Sacramento in California who liked motorcycles would have a set of antique Samurai armour to hand. In that case I just had to make something up myself and hope people liked it.
The Data Viper (again see below) was the easiest new character to bio. Hasbro’s John Worden has gone on record as to his thinking behind the Character and his role. The file card I wrote takes a lot of that into account. 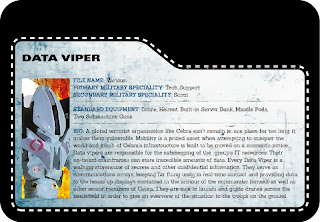 Fun fact: There’s seven versions of Snake Eyes in this toyline: Waves one, two and three point five had different single packed versions, We got two other versions in the Battle packs and two more as vehicle drivers (for the cycle and AWE striker repaint). Even an unrepentant Snake Eyes fan boy such as I doesn’t own them all. (For the record I have four of the seven.)
There’s also five different Storm Shadow figures (Waves One, Two and three point five, two from Battle packs).
I thought it was only fair that each different release gets a different card. I’ve tried to keep things more interesting by talking about the weapons and equipment they come with as well as their characters instead of just repeating “Snake Eyes is a Ninja Commando and he is awesome” over and over. Even if everything in that previous sentence is true.
I’ve taken up enough of your time. If you want to know anything else, or complain please hit me up on twitter @paddylennon1 or via facebook: Paddy M Lennon
Posted by Total Retaliation at 12:47 No comments:

I don't know about filler - but there's certainly plenty of killer figures in this wave. Wave 2.5 action pose photos are all complete. Below is a selection of some of the unedited shots. 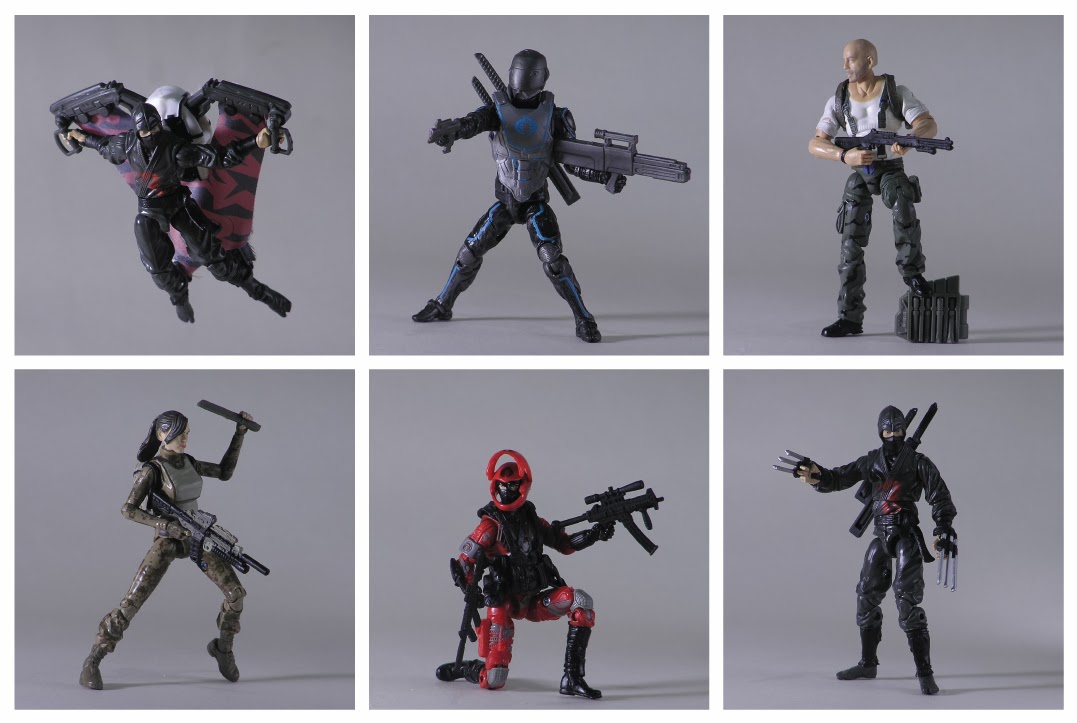 Posted by Total Retaliation at 13:57 No comments:

Wave 2 action pose photos are all complete. Below is a selection of some of the unedited shots. 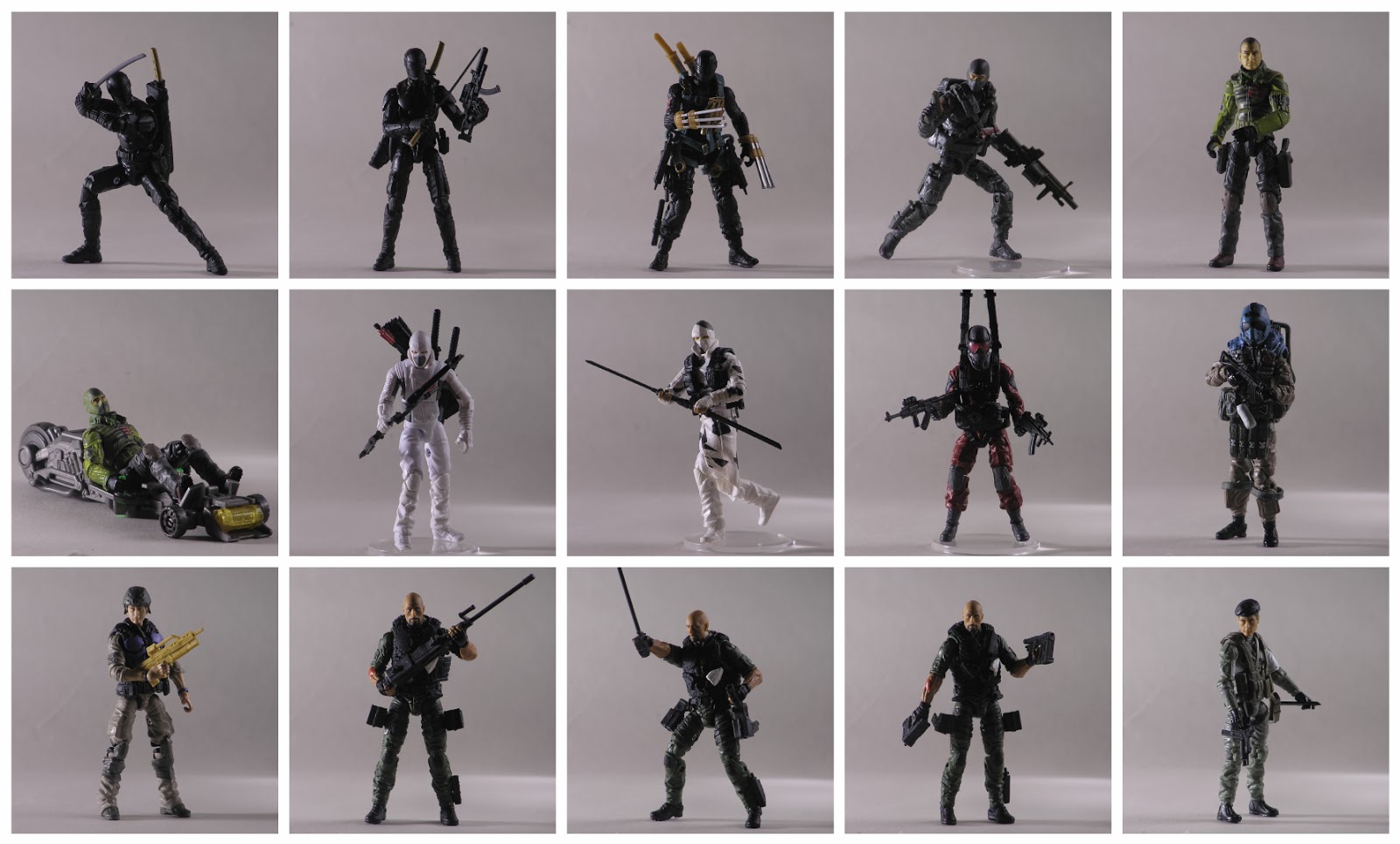 Posted by Total Retaliation at 00:28 No comments: